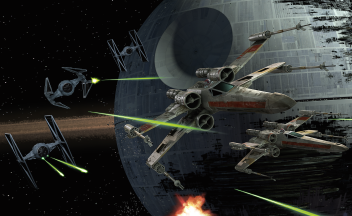 Okay, I know the last post was about Humble Bundle’s Tom Clancy video game bundle, and two Humble Bundle posts in a row may strike some as somewhat repetitive. Plus, this particular bundle has been available for over a week, so I’m late. However, it’s “Force Friday” because of a Disney marketing strategy to sell toys that retailers apparently understocked on (I am so glad I stayed home today). The bundle is available for four more days. I haven’t spread the word about it. That equals three good reasons to talk about it, according to me. Oh! AND this bundle is audiobooks instead of video games, and it’s Star Wars instead of Tom Clancy, which make two more additional reasons, so let’s do this thing!

I have an odd experience with Star Wars. In 2001 through 2004 I was working on a science-fiction novel about an interplanetary war between one planet-wide kingdom and another planet-wide kingdom with various fantasy tropes such as magic and prophecies alongside sci-fi tropes such as cybernetic limbs and (of course) interplanetary travel. I’m a fan of both genres so I was mashing various elements together in an epic good vs. evil plotline. Imagine my surprise when I finally got around to watching all six Star Wars movies for the first time in 2007 and discovered… many similarities. Too many for my liking, and it’s created a conundrum for me. I really like the story I had, but I don’t want to be compared to Star Wars. Can you imagine the nerd rage? I’ve spent eight years cutting the story to pieces to make it unrecognizable, but I’ve never really liked the results. Being attacked by Star Wars fanatics can be good publicity, right?

In any case, I obviously like the various ideas and concepts in Star Wars, but (shields up) I don’t like how they were executed in the movies.

Now, I understand I’m not the only one who has that issue, especially if you start talking about the prequels, but for me it extends to all six. It might just be that I’m biased and I liked my fantasy/sci-fi mashup better. It might be that I haven’t watched those movies in eight years and my memory is foggy. It might be that I’m totally right about Lucas needing another writer!

But anyway! The Humble Audiobook Bundle offers up to eleven Star Wars audiobook titles depending on how much you give them. Here’s the lineup!

For any price, you get the Original Radio Drama of the original Star Wars movie as well as Star Wars: Tales of the Jedi.

The average-priced titles are The Empire Strikes Back audio adaptation of the second movie, plus Tales of the Jedi: Dark Lords of the Sith, followed by Dark Empire, Dark Empire II, and Crimson Empire. If you think that’s a lot of empire, well, yeah, it is. The final tier gives you the Return of the Jedi audio adaptation of the third movie, and the Dark Forces Collector’s Trilogy which is three titles in one that were apparently based on a video game of the same name.

This bundle ends on September 8th!

What do you think? Cancel reply